I’m excited to be releasing my version of the beloved hymn “It Is Well”. This song has become deeply significant to our family, and I’m honored to be sharing it with you, along with the new, original verse I wrote for the song.

You can access the song almost everywhere digital music is available, including:

Story Behind the Recording
For those of you who would like a glimpse into the story behind why I recorded this song, I invite you to continue reading. 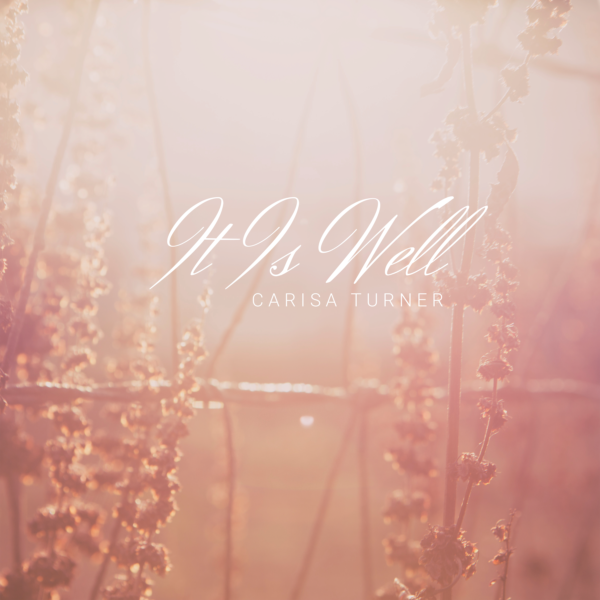 Our Story
This June, my husband and I gave birth to two beautiful boys — James and Jonathan — and last month, we dedicated them at church.

But what’s behind all the joy we presently have in our hearts is a long road full of disappointment, heartache, and uncertainty about what our family would look like.

We began trying to grow our family a little over three years ago, when our daughter was about 20 months old. For anyone who has struggled to conceive, you know the experience is long, lonely, and emotionally, mentally, and physically exhausting in a way that’s unlike anything else.

It’s an endless cycle of disappointment, grieving, picking yourself back up, making yourself hope again, trying, waiting, and then falling emotionally once again.

About 16 months in, we finally got pregnant. We found out on Christmas Day and, quite honestly, didn’t believe it at first. We were elated and counted ourselves lucky that our journey was only 16 months. We know many people whose journey to conceive lasts much longer than ours, and often without any resolution.

No answers. No explanation. My most vivid memory from that day is of the ultrasound tech confirming that yes — we were losing our baby.

The Beginning of the Song
Later that day, my husband told me the song “It Is Well” kept playing over and over in his head on the entire drive to the doctor. And so, as part of our grieving process, he began to search for a version he would call “ours”, a version we would cling to as we mourned together.

After weeks of searching, he didn’t find one that seemed to really “fit”, and that’s how we decided together that I should create one for us.

Part of that process was writing a new verse that would speak to our story. It was a uniquely difficult creative endeavor, to bring to life musically all our sorrow and uncertainty, while trying to write something worthy of being added to such a beloved, foundational hymn.

But it was something we knew would be good for our souls.

Looking back now, we can see how God used this song to carry us through.

A Change to Our Story
In the middle of this project, a little over two years into trying to grow our family, we decided to see a reproductive specialist.

After weeks of testing, they determined nothing was specifically “wrong” and gave us two options for next steps. The option we pursued included having me go on hormones and an IUI. Before we started, we agreed we would only try this for two months, and if nothing happened – we were prepared to close this door and begin living our lives as a family of three. We were too exhausted to keep going.

A month later, we found out we were pregnant.

And not only were we pregnant — we were having TWINS.

We have never been as shocked, or as confused about how to realign ourselves emotionally, as we were during that time.

It was a complete 180 from where we had been.

God Is Teaching Us … It Is Well
When I began this recording project and was writing our verse, I was in the middle of mourning the loss of our baby, was feeling completely exhausted and depleted, and was starting to come to terms with never having any more children. In all of these moments, as I was struggling to understand, feeling like life was on hold, wondering what to do next … God was teaching me it is well.

When it came time to record the song, I was a few months pregnant with twins. It felt odd to sing this song from a different emotional place. I had conflicted feelings about how to enter the studio, how to capture the full essence of our pain, how to openly rejoice in our current joy without feeling like I was forgetting the baby we lost. In these moments … God was teaching me it is well.

A few days after giving birth and coming home from the hospital, my husband took our daughter to church while I stayed home with the boys. That Sunday, our church sang “It Is Well” for the first time in almost a year. My husband later told me how deeply significant it felt to sing “our” song on the other side of this experience. We didn’t sing the song again at church until four months later, on the Sunday we dedicated our boys. That morning, my husband and I stood side-by-side, worshiping God in the truth of these lyrics. In both moments, God was showing us it is well.

Now, as I release this song and begin openly sharing our journey, it feels a bit strange to be so far removed from the intensity of our struggle. We want to share our story to help open up dialogue within the church about miscarriage and infertility. Yet at the same time, we are nervous because our story has a happy ending, and we are painfully aware of those walking this road who cannot say the same. However, we know this is the story God has given us to steward. And so, as we take this step in faith, in all its vulnerability and uncertainty, God is teaching us it is well.

It seems only fitting to end with the lyrics to my original verse:

Oh Lord, this I know, in life’s uncertainty
That my hope is in you alone
And so I remain, by your hand sustained
In your peace, it is well with my soul